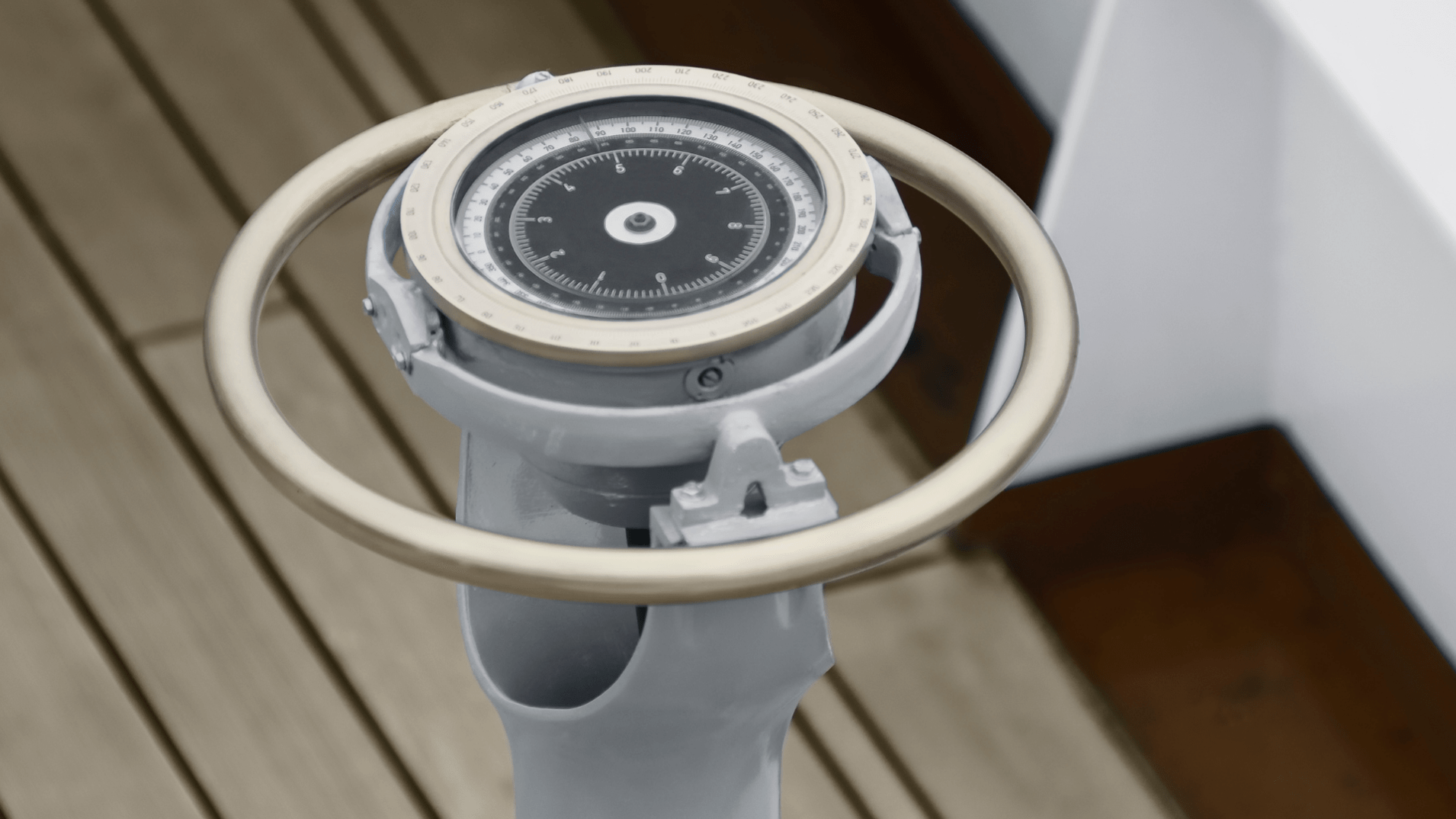 A gyro compass is a sort of Gyroscope that uses an electrically powered, fast-spinning gyroscope wheel and frictional forces, among other things, to find true north using basic physical laws, gravity’s influences, and the Earth’s rotation.

Because of its capacity to detect true north rather than magnetic north, the gyro compass has become a vital tool in practically all merchant ships and naval vessels. It is made up of the following components:

Using a Gyroscope determines and maintains the true north reading.

Receive and display the true direction from the Master Compass via electrical transmission.

On a moving strip of paper, keeps a continual record of the maneuver.

Controls the system’s electrical operation and measures the running condition with a suitable meter.

Voltage Regulator: Maintains a steady flow of ship power to the generator.

Alarm Unit: Stipulate the supply of the ship has failed.

Motor Generator: The Compass equipment is energized by converting the ship’s DC supply to AC.

One transmission method connects the gyro compasses to the repeater compasses. The linked fast-spinning rotor weighs between 1.25 and 55 pounds.

Another electric motor spins it at thousands of revolutions per minute. The spinning wheel, often known as the Gyroscope, is the most important component of a Gyro compass system.

Gyro compasses are not affected by external magnetic fields that deflect regular compasses. The autonomously driven structure known as ‘Phantom’ travels by the ship when it changes direction, but the rotor system continues to point northward.

Because of this, misalignment can send a signal to the driving motor, which then shifts the phantom step in with the rotor system in a path where the phantom may have managed to cross only a fraction of a degree or several degrees of the compass circle.

The phantom sends electrical impulses to the repeater compasses for each degree it travels when they are aligned.

The Gyroscope in the Gyrocompass is mounted so that it can freely rotate around three mutually perpendicular axes and is controlled so that its axis of spin remains parallel to the true meridian, despite the Earth’s rotation and gravity.

The uses of the Gyrocompass system are based on two key characteristics:

Precession: When a couple is applied, this property causes the Gyroscope to move. Instead of traveling in the same direction as the couple, it moves at right angles to the applied couple’s axis and the spinning wheel.

The Gyrocompass uses these two qualities and the Earth’s two natural forces of rotation and gravity to find true north.

The rotor will remain on the true meridian eternally as long as the ship’s electrical supply is stable, unmodified, and unaffected by external factors.

However, certain steaming mistakes may occur due to the ship’s path, speed, and latitude. The Gyro compass north is somewhat distorted to the West of the real meridian on northerly courses, whereas it is deflected to the East on southerly courses.

Modern ships provide data to the Gyrocompass to correct the inaccuracy using GPS or other navigational aids. An orthogonal triad of fibre optic design and ring laser gyroscopes, which use optical path difference to measure the rate of rotation rather than mechanical parts, could help eliminate flaws and detect true north.

If you are looking for the best gyro compass for your ships, contact us at http://www.orbitshub.com